Can UPS be used with diesel generator?

You are here: Home1 / Blog2 / Can UPS be used with diesel generator?

Can UPS be used with a diesel generator?

When the UPS is used with the generator, you need to configure a small number of spare batteries for the UPS in case of a switchover. The power conversion mode between the generator and the mains is a manual or automatic switching device (ATS). When the mains supply fails, the ATS will automatically switch to the generator, and the generator will automatically start to provide power after a certain time delay (which can be set according to the customer’s needs). In practical application, according to the availability requirements of different customers for the power supply system, UPS and generators are configured in different ways. Generally speaking, they are commonly divided into single machine mode and parallel machine mode, etc. They have their own characteristics. Today, Gosun will introduce the solution when UPS and generators are used together:

Select a single UPS based on the actual load power. The schematic diagram of the power supply system is as follows: 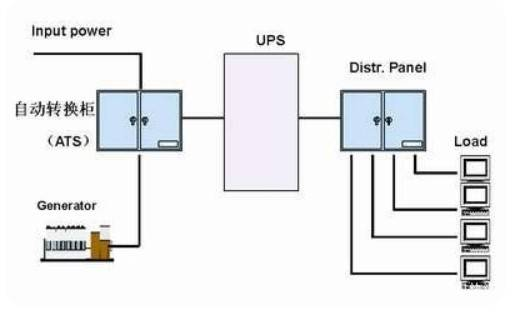 The main components of the system are:

When a single system cannot meet the requirements, two or more UPS with the same power are often used to run in parallel to improve the reliability of the parallel system. The schematic diagram of the power supply system is as follows. 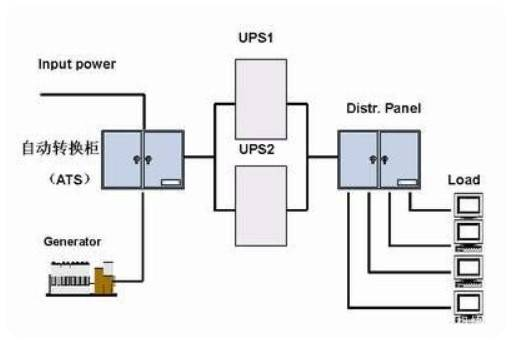 Connect the mains power supply R, S, T, and N to the UPS according to the phase sequence, and then connect the ground cable by hand to check whether the cable is loose, and then lock it. After confirming the phase sequence of R, S and T, a multimeter was used to measure the voltage of R-N, S-N and T-N within the range of 220V±25%, and the frequency was 50Hz±1. Turn off the machine’s mains power input switch, and then turn off the machine’s automatic bypass switch. If there is a long alarm sound, it is the mains power input phase error, and it should be corrected immediately (any replacement of the two phases of the input three-phase, no long alarm means that the phase is accurate).

In high-power UPS systems, the customer’s need for a long backup time often means a large number of backup battery packs. This configuration scheme has certain limitations. A large number of backup battery packs require large storage space, so load-bearing should be considered in this case. In addition, the backup battery pack has a certain replacement cycle, which also requires a large cost input. In order to solve these problems, it is often considered that the diesel generator is used in the UPS configuration, and the diesel generator is used as the ultimate backup means.

It is necessary to consider the matching problem when connecting the diesel generator with the UPS. From the external characteristics of the diesel generator, the factors affecting the frequency and output voltage stability are mainly the high harmonic components of the load current. The instantaneous start of the load. The input power factor of the traditional double transform UPS is only 0.8, and the high harmonic of the input current is more than 30%. When the diesel generator is used for power supply, it will inevitably seriously affect the stability of the frequency and output voltage of the oil generator. Therefore, the power capacity of the generator must be up to 2.5-3 times the capacity of the UPS, in order to ensure the normal operation of the system.

1 Bypass phase lock frequency range and inverter synchronization rate field adjustable function. The UPS with this function can be adjusted based on the type of the power supply device to improve system reliability.

How to choose the right diesel generator size for ups systems?

How long will a diesel generator last? (Life expectancy)
Scroll to top